Prince George, BC – P.S. Piano Service and the Prince George Symphony Orchestra are teaming up to bring five public pianos to Prince George to help celebrate its centennial. All of the pianos will be available for the public to play between July 9th and 19th.

Two of the pianos will be painted by local artists. Maggee Spicer and Karma Vance, who previously painted the piano at the new BC Cancer Agency Centre for the North, have painted the piano which will be featured at the Prince George International Airport. Erin Stewart, a local visual artist and musician, will have her piano featured at the Civic Centre. Three more pianos will be scattered around downtown Prince George in outside locations.

Lindsay Cotter with the Prince George Airport Authority is thrilled to host one of the pianos. “We were approached by Peter about this unique project and we felt it was a great way to celebrate the city’s centennial and to provide our customers with a new service while encouraging the art of music. The Centennial Piano Project also fits perfectly with our YXS Gallery Program where we feature local art and artisans throughout the terminal.”

“As a piano technician, I see many pianos that sit, neglected and unused, in people’s homes for years and years. I am delighted to help put some of these pianos into public spaces so that everyone can enjoy them,” says Peter Stevenson, owner of P.S. Piano Service.

Public “street” pianos are a growing phenomenon around the world; there are now thousands of pianos that have been installed in public places. “Organizers of these projects have found that these pianos reinvigorate a sense of community and are effective in bringing the joy of the arts into the public sphere,” says Stevenson. “Here in Prince George, we see this as an important way to bring people into the city’s centennial celebration by providing an interactive opportunity for them to play, create, and celebrate.”

Check out the Centennial Piano project at its locations, or via Facebook at https://www.facebook.com/centennialpianos, or on Twitter @centennialpiano. 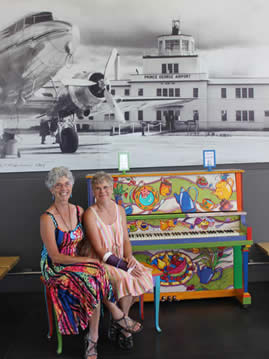 Rhapsody in Brew by Maggee Spicer and Karma Vance